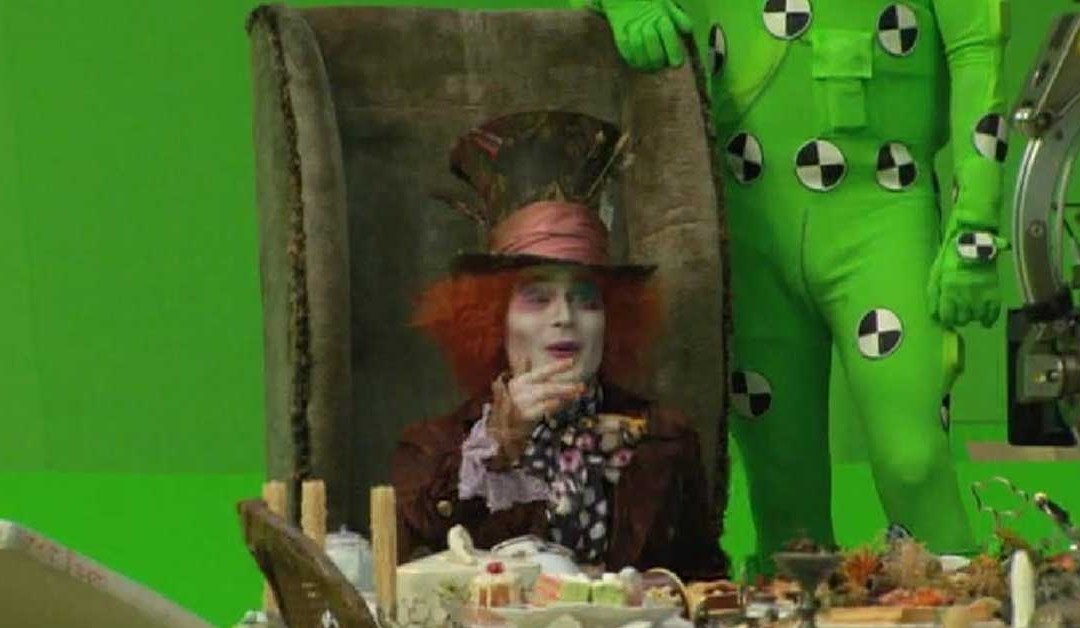 In the beginning of green screen…and I mean the very beginning of film was George Melies and “un homme de tetes 1898”. In this film, Melies employes a trick, the precursor to the modern green screen effect, known as a holdout matte for the first time in any motion picture. It was accomplished by putting a piece of glass in front of the camera and painting sections black so that they are not exposed and then covering the remaining areas and re shooting the unexposed portions of the film with whatever you would like to composite in. and the world of compositing is born.

Compositing: The technique of combining different shots and elements into a single image.

This technique was then used again on Edwin S. Porter’s “The great train robbery” to create the environments outside the windows and door of the train cars.

The next evolution leading to green screen techniques is the “glass shot” or matte painting. It involved painting elements onto a piece of glass and filming through it. Originally the process was costly and time consuming as the camera had to be set up and the painter had to paint it on location.

Norman Dawn perfected the technique by combining the holdout matte technique and glass. He painted the glass black on location and then doing the glass shot of that portion of the film in studio later, a technique that was used heavily for the next 40 years.

There were some problems with glass shots, the actors couldn’t cross line of the matte painting and camera must remain still. This was solved in 1918 by Frank Williams as he patened his traveling matte shot.

Used extensively (and quite well) in the 1933 film the Invisible Man.

The biggest problem with the Williams process of traveling mattes was that it didn’t allow for shadows. The Dunning process sought to fix this by using yellow and blue light to separate the background and foreground elements.

First used on King Kong, it wowed audiences. It unfortunately didn’t work on color film and was superseded by Larry Butler technique. He used a three strip technicolor process, for which he won an academy award in 1940. The matte still had edge issues and couldn’t handle fine details like hair. It was however, the first of what we consider modern bluescreen and went on to be used on films like the Ten Commandments.

This is a side note and is one of the solutions by someone who is considered the father of modern bluescreen, Petro Vlahos. The process basically used a screen lit by a yellow sodium vapor light and there was a prism on the camera that split it off onto a separate piece of black and white film, creating the traveling matte. This was the highest of technology for almost a decade and won Disney the academy award in 1964 for Mary Poppins.

So why did this technology never take off? It was technically superior to anything made at the time, however there was only one camera in existence that could do the process and that camera was owned by Disney and it was not cheap to rent.

In 1959 Petro Vlahos perfected the bluescreen traveling matte that will be used for the next 40 years and was first used on the feature film Ben Hur.

In the 90’s Greenscreen technology took off. The digital film maker started to switch to this technology because of the Bayer Pattern on digital camera sensors. This allowed mattes to be pulled cleaner on green channels and required a lot less light than bluescreen techniques.

So what is the future of matte work? Depth mattes. Imagine a system where you didn’t have to put up a green, blue or any color screen. In fact you don’t have to put up a screen at all. The film instead has the depth information encoded in the pixels of the film. This is now being done in CG and soon we will have film cameras that innately embed this technology.

So we would love to hear what you think is the future of mattes and greenscreen technology. What do you think? Let us know below.